At that time, if anyone says to you, ‘Look, here is the Christ!’ or ‘There He is!’ do not believe it. For false Christs and false prophets will appear and perform great signs and wonders that would deceive even the elect, if that were possible. See, I have told you in advance.  So if they tell you, ‘There He is in the wilderness,’ do not go out; or, ‘Here He is in the inner rooms,’ do not believe it. For just as the lightning comes from the east and flashes as far as the west, so will be the coming of the Son of Man.  Matthew 24:23-27

Here’s the tech behind the Carolina Panthers’ giant AR cat

This past weekend marked the first Sunday of the 2021 NFL season, and while it was full of exciting highlights, one may have towered over them all: the Carolina Panthers’ viral video of a giant virtual panther leaping around Bank of America Stadium.

The video is ridiculous. A big virtual cat jumps into the stadium, paces around the field, shreds a New York Jets flag (the Panthers’ Sunday opponents), and hops away with a menacing roar. It’s proved to be hugely popular, with 5.6 million views on Twitter. 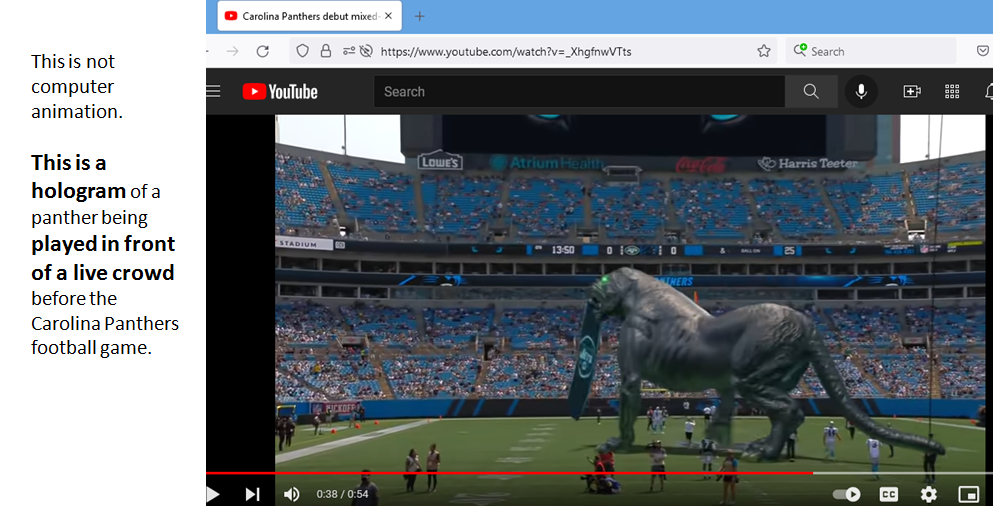 Reality Engine‘s AR graphics crashed the stage at the League of Legends final’s Opening ceremony. The grand final of the tournament took place at the Beijing’s famous Bird’s Nest Stadium. Besides 100 thousand people at the stadium there were over 40 million online viewers at their PCs and TVs watching the grand final online. .....the dragon started flying over the crowd, and landed to stage also let out a good roar before taking off again. The dragon itself was highly detailed and made a noticeable impact. Even after the tournament was over, people were still talking about dragon at the forums. 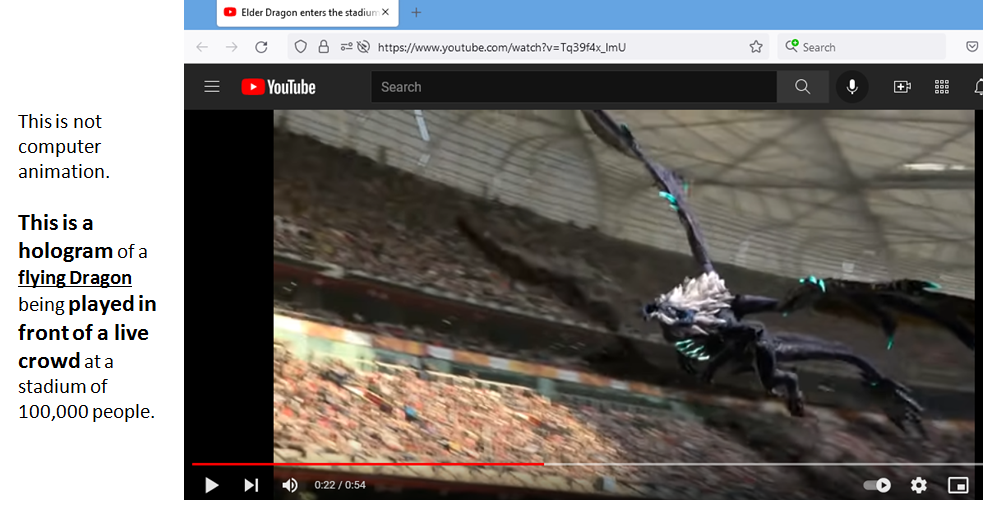 On November 30, 1961 a second attempt to overthrow the Cuban dictator Fidel Castro commenced. It was called Operation Mongoose, and was led by U.S. Air Force General Edward Lansdale of the United States Department of Defense (DOD). Lansdale worked closely with the Central Intelligence Agency (CIA) to implement the 33 individual phases of Operation Mongoose. The end goal was the overthrow of Castro.

Here's where it gets weird.

General Lansdale and his agents designed a plan to try and convince the people of Cuba that:

How the DOD and CIA proposed to execute a fake Second Coming of Jesus Christ to overthrow Castro is revealed by Assistant Deputy Director for National Intelligence Programs Thomas A. Parrott in his 1974 report to the United States Senate.

"Lansdale's plan consisted of spreading the word that the Second Coming of Christ was imminent and that Christ was against Castro who was anti-Christ. And you would spread this word around Cuba, and then on whatever date it was, that there would be a manifestation of this thing. And at the time – this was absolutely true – and at the time just over the horizon there would be an American submarine that would surface off of Cuba and send up some star-shells. And this would be the manifestation of the Second Coming and Castro would be overthrown.”

Star-shells are powerful pyrotechnic flares designed to fill the skies at night with widespread illumination. Parrott reported to the Senate that Lansdale intended for a U.S. Navy submarine to project images of Jesus Christ onto low lying clouds off the coast of the Cuban capital of Havana. While the image of Christ appeared over Havana, a crew from a U.S. military plane - camouflaged by the clouds and using new technology that muffled the plane engines - would broadcast  messages from Jesus Christ over a loudspeaker to the people of Cuba (in Spanish of course), ordering them by the authority of God Himself to overthrow Castro the anti-Christ and renounce communism.

The operation was never executed out of fear that either the submarine or the airplane might actually be discovered by the Cuban military and the potential loss of American life was too great a risk.

Copyright © 2014 by Counterfeit Rapture.  All rights reserved.  Except as permitted under the U.S Copyright Act of 1976, no part of this publication may be reproduced, distributed, or transmitted in any form or by any means, or stored in a data base or retrieval system without prior written permission of the publisher.